The Right Display for Now

At Tilt, Han and I talk a lot about the different modes developers are in and problems they’re solving when using software. Sometimes it’s easier to talk about these modes when we relate them to signs in the real world.

Tilt has always initialized your terminal with a terminal GUI.

We previously thought of the split between terminal GUI and browser GUI as two complementary GUIs for different modes: awareness vs investigation. But in the year since we launched the browser GUI, we’ve heard from users who see these as two competing interfaces. At a glance, they can seem equivalent, like it’s a matter of preference which one you’d like to use.

Some devs do prefer the terminal GUI! But by starting there, we did a poor job communicating that there might be better modes for you.

When you start Tilt in a terminal, here’s what you’ll see:

We expect that most users will want to hit (space) to open the browser, where they can browse logs, check deploy status, and trigger rebuilds.

If you liked the terminal GUI and want to keep using it, you can hit the (h) key or start Tilt with tilt up --hud=true.

If you just want to see logs, or don’t have an interactive terminal, you can hit (s) or start Tilt with tilt up --hud=false.

We currently have no plans to get rid of the terminal GUI.

We may keep all 3 modes! Some people prefer a terminal, others prefer a browser UI, and a few even run everything in an Emacs buffer 🤓.

We’re keeping an eye on what modes people use, and talking to our partner teams about which they prefer.

We want Tilt to be the dashboard you interact with when you’re doing interactive, multi-service development.

But if you want other types of visibility into your dev cluster, we recommend:

They are both great tools, and have progressed a lot since we started working on Tilt 😀.

A New Interface for Tilt

As of v0.18.6, Tilt has a new interface. If you haven't already, check it out by toggling "New UI": ![Try the New UI](/assets/images/new-tilt-interface/new-ui.png) Among other improvements, a new **Overview** helps you understand the status of all your resources at a glance. (The familiar log-browsing layout is still available, under "All... 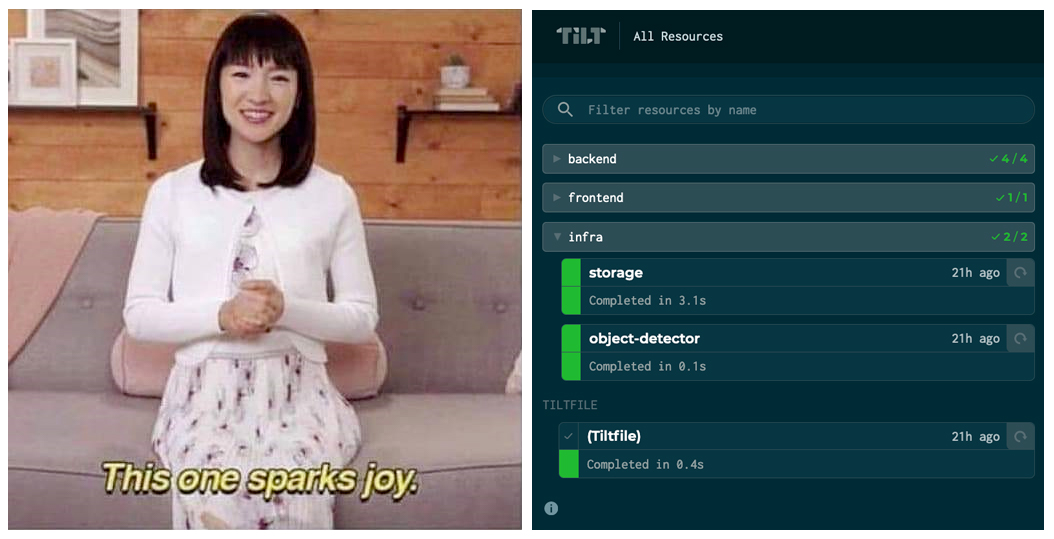 Use labels to organize your multiservice dev environment